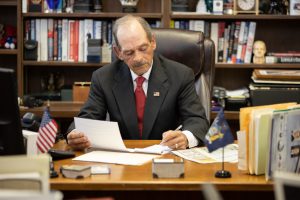 Karl Simmeth was raised in the town of Boston, New York and has served proudly as the Town Chair of the Boston Republican Committee since 2009. Under Karl’s leadership in his first year as chairman, the Republican Party swept three out of three town board seats retaking the majority. A State Committeeman since 2018 AD-147, Karl Simmeth has been a longstanding supporter of Chairman Nick Langworthy during his administration as Chairman of the Erie County Republican Committee.

Chairman Simmeth is a proud US Veteran, having served in the US Air Force monitoring Russian Intelligence for the National Security Agency. His tours of duty included Misawa AFB in Japan, and Ft. Meade, MD. After four years active duty, and two as a reservist, Karl was given an honorable discharge in January 1981. After returning to the Town of Boston, Karl began to work for ECMC where he later retired after 33 years of service.

Karl is a passionate champion of conservative issues, fighting for lower taxes, accountability, and more efficiency in government. Prior to becoming Chairman of the Town of Boston, Karl served two consecutive terms as councilman where he practiced what he preached, holding the line on taxes and wasteful spending.

In 2009 the Democrat majority on the Boston Town Council left taxpayers discouraged while the town Republican Committee was in disarray. Karl Simmeth began a strong grass-roots campaign to find new Republican Committeemen and women, recruit strong candidates, and rebuild a Party that had fallen on hard times. He led the effort to identify and turn out voters with a “taxpayer first” message, and come November, led his Party to a three-seat sweep. Since then, under Chairman Simmeth’s leadership, the committee has recruited strong male and female candidates who have been elected on their merit.

Karl Simmeth and his wife Kathy live in the Town of Boston where they remain active in the community.